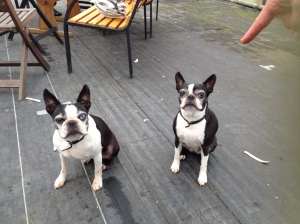 Much excitement today as we all piled on the 9.12 from Putney to Windsor. Especially exciting for me as I had already been (admittedly in the car) to Raynes Park station, two schools in Kingston, done half an hour of car park duty, raced home, bolted to the garage and swung my leg over the pre-prepped bike and off down the hill.

But it really did feel like a school outing. Bealsey (Bespoke-Velo) guided us onto the cycle carriage, roughly in the middle of the train. A couple of women clearly thought we were showing off in our silly Lycra outfits, and who can blame them really. No one wants their carriage invaded by four exciteable women (and one laid back Aussie) on a brief escape from their daily routine.

We alighted at Windsor. Alighting being the exact opposite of what it felt like in cleats, and rummaged in all our weird pockets for our tickets at the gate.

And we were off. Up the high street and then on into Windsor Park. Past a king-on-horse statue whose creator killed himself for forgetting the stirrups (I haven’t checked this nugget from Bealsey) and onto a loop that took in a lovely new cake stop for me, Elm Nursery. We got a very friendly welcome and the cakes were fabulous. Why do I keep forgetting to photograph the cakes? They disappear so fast, maybe. I did photograph two resident French bulldogs, one half blind. Eventually I’ll find my way through the Microsoft filing system and post them here.

Then it was on past Ripley, a flooded Cobham, Esher and on and on (90k today) until we finally popped up, miraculously in Wimbledon again. I shall study the map. I don’t know how we got there, I really don’t.

Note to self: Don’t get angry at technology, it can hear you