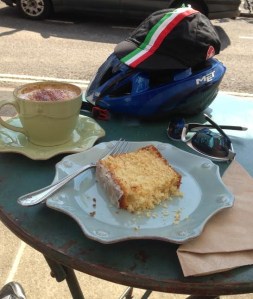 I took this picture at Nest, Ripley, the first time I rode out by myself

I am a late forties ex-journo and mother of three. My riding story begins at the top of Surrey’s most iconic climb about five years ago. My friend Jacqui and I had tentatively ridden out to Box Hill following her husband’s Garmin route on our new road bikes. The hill turned out to be much tamer than we anticipated – but the tea and cake stop at the top became a favourite haunt as we explored the other hills. It’s hard not to keep going back, I think they put something in the tea.

Jacqui and I did the Diva that first year and a few other sportives. In 2014 we raised our game – and bought new Mavic Ksyrium Elite wheels – to do the Dragon Ride (Medio, 6hrs43) and Etape Cymru (6hrs14). And then last summer I tackled the Dragon Ride Gran Fondo (230km) and the Etape du Tour (finishing about half way down the field – very proud of myself, it’s mostly men).

I am still cycling as we now drift into winter (London Etape, tick) and I am looking for my next challenge. Another Etape? Maybe one of the other European Gran Fondos? What ever it is, I can’t stop now …